Menu
Log in
Register
Install the app
You are using an out of date browser. It may not display this or other websites correctly.
Module icon

Status
Not open for further replies.

Originally published as the Authorized Version in 1611.
This edition of the KJV conforms to the text of the King James Bible printed by Cambridge University Press, from c.1900 to c.1980.

This module is included in the Deluxe Library.
Click to expand...

Read more about this resource...
Brandon
Author of SwordSearcher Bible Software
Ephesians 6:17 And take the helmet of salvation, and the sword of the Spirit, which is the word of God

An email I received today prompted me to write this.

Occasionally I receive an email wondering if a particular verse in SwordSearcher's KJV text has a typo in it. For example:


Genesis 24:57 And they said, We will call the damsel, and inquire at her mouth.​
The reason for this is that there are different printings of the KJV. Naturally, people want to be sure their KJV text in SwordSearcher is error-free, and sometimes they might notice a word is spelled a little differently than what they expect.

In the above example, some KJVs have "enquire" instead of "inquire." Indeed, much older versions of SwordSearcher did as well.

When faced with these differences, I realized I could not arbitrarily decide which reading I would use as the standard for any particular verse. So, after doing innumerable comparisons of printed Bibles, I settled on using the circa 1900 text of the King James Bible as it was published by the Cambridge University Press (as well as Collins and many American printing houses). This is easily the most widely published single "edition" of God's word in the history of printing. I have compared a lot of printed Bibles from the last century and most of them hold to this edition. Using this as a standard avoids the problem of arbitrarily deciding how a word should be spelled or presented.

So, how accurate is the KJV text in SwordSearcher? After years of using this edition, I am confident that it matches exactly the Cambridge circa-1900 edition KJV text.

What should you do if you think you have found an error in the KJV text in SwordSearcher? You should email me and let me know! I will double-check it. The text of the KJV in SwordSearcher is the absolute most important text in the software to me. I will always want to make sure.

But my original example (enquire/inquire above) leads to the question: But what about these spelling differences and searching? What if you type enquire in a Bible search for SwordSearcher?

This is where SwordSearcher's unique and intuitive Bible search functions really shine. See this screen shot, where I have typed "enquire" to do a Bible search in the KJV: 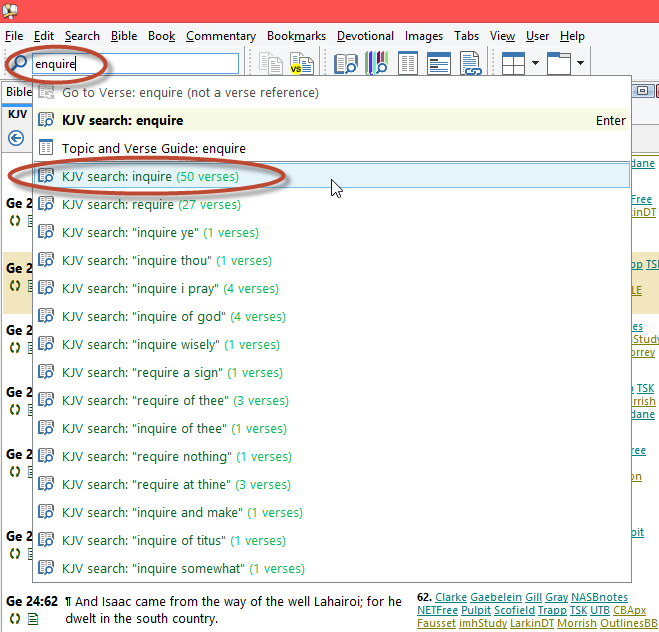 As you can see, SwordSearcher can easily make the correction suggestion for you, so you don't have to guess at what the spelling should be.

Another example is searching for "razor," since the SwordSearcher KJV has the Cambridge 1900 edition spelling of "rasor": 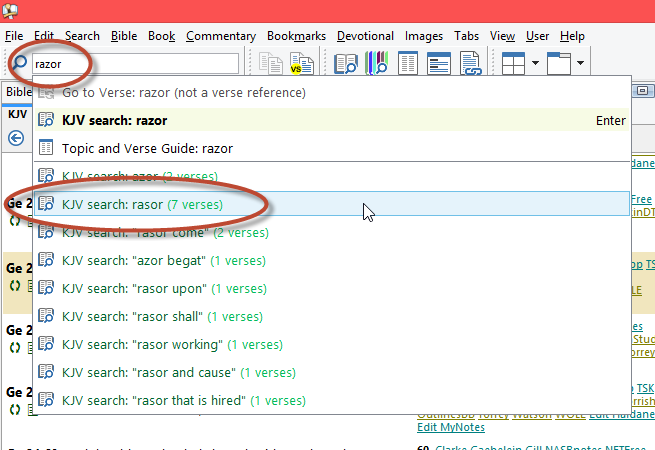 Again, you can see that although there are no verses with "razor" SwordSearcher will suggest a search for "rasor" instead.
Brandon
Author of SwordSearcher Bible Software
Ephesians 6:17 And take the helmet of salvation, and the sword of the Spirit, which is the word of God

Status
Not open for further replies.