Menu
Log in
Register
Install the app
You are using an out of date browser. It may not display this or other websites correctly.
Module icon

(Scripture text used in this publication are from The Holy Bible in The Korean Revised Version translated by the Korean Bible Society in 1961.)
Click to expand...

Read more about this module...
Brandon
Author of SwordSearcher Bible Software
Ephesians 6:17 And take the helmet of salvation, and the sword of the Spirit, which is the word of God

Thanks to forum user rjg for providing this Bible module.
Brandon
Author of SwordSearcher Bible Software
Ephesians 6:17 And take the helmet of salvation, and the sword of the Spirit, which is the word of God
E

I wonder if anyone reading these forums knows Korean? I once met a native-English speaker who had grown up in S. Korea. He said that some Korean Bibles translate "John the Baptist" as something like "John the sprinkler".

So I downloaded this KRV module (thanks, rjg & Brandon!) and went to Mt 3:1 and put the text in Google Translate. Then I tried to pare down the text to the word GT was translating as "Baptist". By the time I got to one word (I think), GT said it was "baptism". Below the GT translation it offers "baptism, christening, perfusion" as translations of the Korean word(s) 세례 ("selye").

I would be interested to know if anyone can confirm / deny that one sense of 세례 is "christening" or "perfusion". Thank you.

Nota bene: What God did at Babel was a punishment for what mankind was doing there. We still suffer from it, and accurate translation is hard work!

Edit: I had forgotten to attach the screenshot of GT. 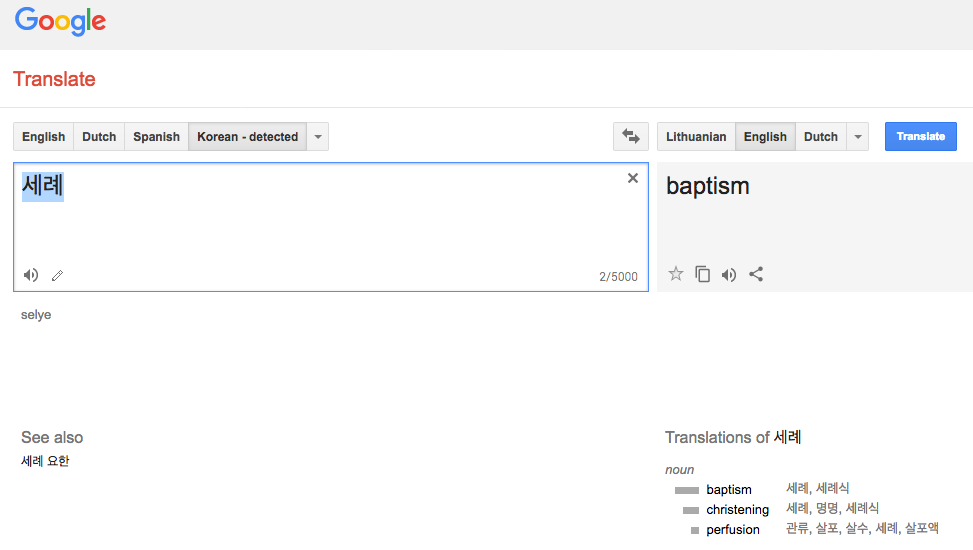 My wife is a native Korean speaker and she says that 세례 translates to English as "baptism". There may be more to the etymology of that word in Korean but "baptism" is the way it is translated
You must log in or register to reply here.
Share:
Facebook Reddit Pinterest Tumblr Email Share Link
Top